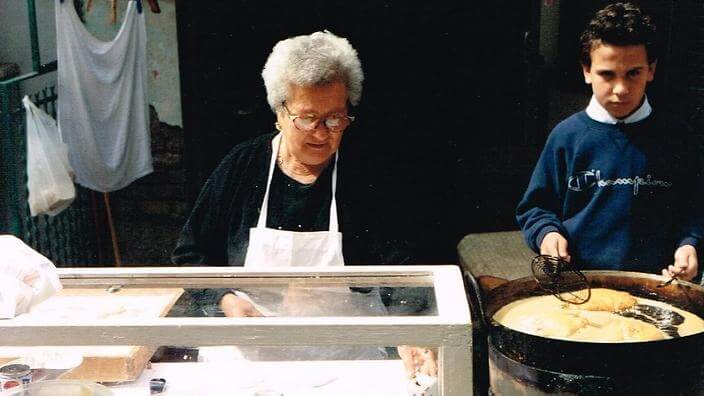 The Via Napoli owner began selling pizza fritta with nonna at age nine. Today, her pasta e patate is one of his favourite dishes.
“I came from a very poor family,” says Luigi Esposito, who grew up in Naples, Italy. “When I was nine, I had a choice: go to school or go to work. I chose to go to work with my grandmother, making pizza fritta.”

To produce the Neapolitan snack of deep-fried pizza, they had to start their day early.

“I got up at 5am to make the dough. We had a 30-litre timber bucket to mix the flour, water and yeast. It was me, my grandmother and my father all making dough together,” the owner and chef of Sydney’s Via Napoli restaurants tells SBS Food.

Once the dough was stretched and ready to cook, Esposito and Nonna Rosa would walk through the streets of Naples. “We used to scream, ‘We’re open! Hot pizza fritta!’ From the balconies, people called down their orders and we’d write them down, go back and make 50 or 60 pizza fritta and then deliver.” 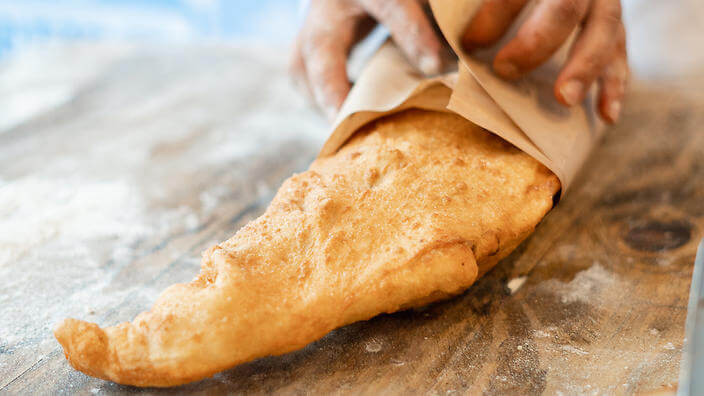 The pair had a makeshift street kitchen outside their front door. There was a table where ingredients like tomato and provola cheese were folded inside the calzone–like pockets. Esposito was responsible for the 25–litre pot of oil that was heated over a gas bottle. He fried the pockets for 60 seconds before wrapping them in paper and delivering around the neighbourhood.

“People used to have a bucket on a rope on their balcony,” he says. “They’d send down the bucket with the money, we’d put in the pizza fritta and send it back up.”

Pizza fritta was born of necessity in a part of the country where poverty meant that all members of a family had to do their part and work. Esposito’s grandfather was a pizzaiolo, making wood-fired pizza. And in the early days, before Esposito was born, he would reserve a portion of dough for Nonna Rosa to make the less labour-intensive pizza fritta.

“The idea of pizza fritta was to create a job for the woman in the family. There weren’t all these opportunities like we have now. People did anything to survive. They’d get up in the morning and think, ‘What can we do? How can we make money?’” 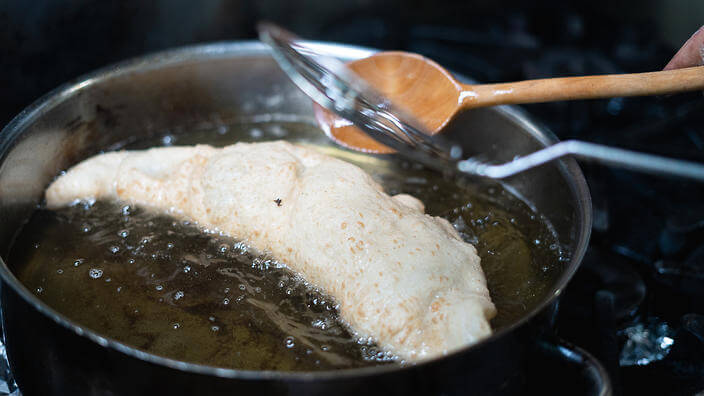 This industrious work ethic was so strong in the family that Esposito, as a boy of nine, felt it was his duty to leave school and go to work.

“I understood my parents worked so hard. It made me feel I had to be part of the family and work also,” he says.

“But I didn’t miss anything. I was poor, there was no possibility to buy a pushbike, or Nintendo, but I was very happy to have my family, and to work to support them as much as I could.”

Although Esposito’s formal school education stopped early, he had ambitions of owning his own wood­–fired pizza shop. After his day shift with Nonna Rosa, Esposito worked at a wood-fired pizzeria at night, learning to become a pizzaiolo. As a young man, he moved to Australia and, in 2011, he opened Via Napoli, a wood-fired pizza restaurant that’s become an institution in the lower north shore suburb of Lane Cove. It’s since been joined by other locations in Surry Hills and Hunters Hill.

“We used to scream, ‘We’re open! Hot pizza fritta!’ From the balconies, people called down their orders and we’d write them down, go back and make 50 or 60 pizza fritta and then deliver.”

Craving the simplicity of his days as a pizza fritta cook, Esposito also opened Pizza Fritta 180 in February. The 60–second flash-fried pizza is similar to the version he made in childhood. There’s even a pizza fritta named for Nonna Rosa. It contains salami, ricotta, provola, tomato and black pepper, honouring his grandmother’s skill with making simple foods delicious.

“One dish I love I remember my Nonna used to make for me was pasta e patate, or pasta with potato,” he says.

The dish is about creatively extracting maximum flavour from humble ingredients. Nonna Rosa started with a sofrito base: diced celery, carrot and onion. The vegetables were sautéed in olive oil until they were soft and sweet, then blanched, diced potato was added. Prosciutto skin and Parmigiano-Reggiano cheese rind were stirred through and the pasta was cooked in the reserved potato water.

“For the dish, you use pasta mista, which is a mixed pasta. You can buy it in a bag, but it used to be all the little bits of penne and spaghetti you have leftover [in a packet]. We would never chuck it away, we’d eat it mixed.”

During Esposito’s childhood, survival required simplicity, creativity and hard work. And although he sacrificed for his family as a child, he doesn’t expect the same of his three daughters.

“I loved to grow up with my family, all working together in the same industry. But look, for kids, you want to try to give them a different life than the one you had. My kids respect me in what I do. They see their father working so hard to give them a better life.”

150 g celery
150 g carrot
1 white onion
750 g potato, peeled
130 g lard
2 tbsp extra-virgin olive oil, plus more for drizzling
320 g pasta of your preference (bags of mixed pasta can be easily found at the supermarket)
1 Parmigiano-Reggiano cheese rind, washed
20 g tomato paste
Salt and pepper, to taste
1. Finely chop the celery, carrot and onion and set aside.
2. Chop the potatoes into irregular cubes (each about 2 cm wide) and set aside.
3. Slice the lard into fine strips and place into a large saucepan. Fry over mild heat with the extra-virgin olive oil for a few minutes. Add the celery, carrot and onion and fry for a few minutes.
4. Add the potatoes to the pan and cover with 600ml of boiled water. Season with salt and pepper. Cover with the lid and let the potatoes cook for 30 minutes over medium to low heat. If needed, add some more water to ensure the potatoes are properly covered, so they can be evenly cooked. When the potatoes soften, remove them from the water and press them with a wooden spoon. Don’t throw away the potato water!
5. Add the pasta to the potato water and immediately add 250ml of hot water. Bring to the boil. Cook the pasta to al dente, add more water or salt if needed.
6. Add the Parmigiano-Reggiano cheese rind and the tomato paste to the pan and stir thoroughly to ensure the cheese and tomato are evenly distributed to create a sauce-like consistency.
7. Toss the pasta, sauce and potatoes together and plate with a drizzle of extra-virgin olive oil on top. Season to taste.